“Drawing helped me find the edges of myself…” 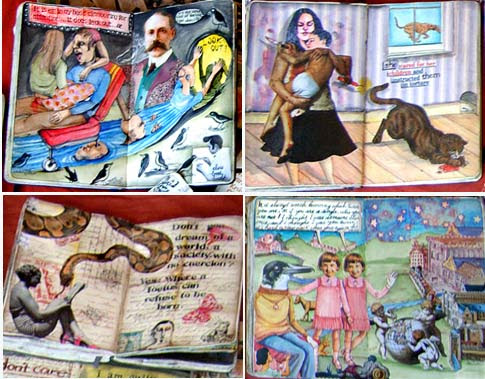 Bunny Mazhari’s work is disturbing, original and, so far, little seen in Hastings. TARA REDDY talked to her. Pictured, an exclusive look into Bunny’s notebooks

Looking at Bunny’s work, you first take in the intricate colourful drawings mixed with collage, the delicacy and care for detail. And then the horror of the imagery reveals itself. It’s a world where nothing is as it appears, nothing can be taken wholly as it is represented. The pretty nourishes the sinister, the colourful contains the bleak. As in life, nowhere is safe.
She was born in the sixties to an English mother and an Iraqi father. But far more influential than the different cultures of her early childhood was the emotional relationships within the family.“We children were not wanted and were an irritation in the way of my mother’s obsessive need to attend to my father’s every whim.” Thisdysfunctional parental relationship went on to resonate throughout her work. “Almost everything I do is aimed at them, it’s my catharsis, my revenge, that helps me take back what I feel they took away from me.”
Negative influence
In her work today, the men are still portrayed as devious, their motives ulterior and the women complicit, long-suffering, enduring conflict in between amorous embraces. Bunny says, “The earliest negative influence was without a doubt my father, he gave me a reductive view of men. A skewed view that I’ve had to cope with to this day. Men are to be humoured, cajoled and condescended to; in essence, impossible to deal with in any kind of straightforward way.” Art was her way out. “Drawing was a mechanism that helped me find the edges of myself, where I ended and the world began. Most people are shocked by the sheer volume. Working is a matter of survival, something that I can’t not do.”
Another dominant theme in her work is the bodily reproductive functions and the carrying of the foetus. The female body is frequently portrayed as a vessel carrying something that is in itself repulsive, both connected with and disassociated from the vehicle. She remembers being exposed at an early age “to the sexual implications of relationships and the unwanted and subsequent disposal of the outcome”. Little wonder that “sometimes people who look at my work don’t want to get sucked into my world and that’s their choice; I don’t expect everybody to enjoy what they see.”
From birth to death
And what they see is a journey through spot-lit scenes of human beginnings and endings: “from birth to death and everything in-between”. Like her work or not, Bunny has a lot to say. She opens a window into her world which entices you in and the more you enter the more you find.
She has recently spent several years as a mature student at Brighton and the Royal College of Art. Was she tempted to abandon her figurative, narrative style? She says, “I am not a great fan of conceptual art as I think it is more often than not created by con artists who have no talent, just smoke and mirrors to fool rich art buyers who want to invest in the next big thing. I love outsider art because I see in it an honesty and truth that is missing from a lot of contemporary art. I love artists such as Stanley Spencer, Paula Rego, Robert Crumb, Henry Darger.”
Today, Bunny’s partner is Iranian and designs and makes beautiful jewellery, and two of her children, Alex and Lucy, are both artists as well. Her work may contain nightmares, but she has quite wholesome dreams. She says, “My dream is to have a family exhibition where all our work can be seen as a whole made up of individual but connected parts.” Something we can all look forward to.