Believe In Us - Moleskine Art 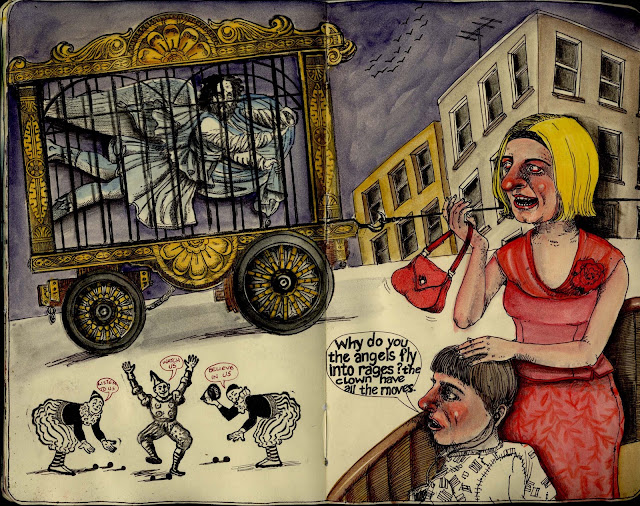 Another page that deals with my ongoing relationship with angels. This relationship began when at the ripe old age of three and a half I told a porkie pie (lie). I was already a skilled liar, a skill I used to get what I wanted simply because I felt powerless in a world where the adults held all the keys. This time however, I was caught out. I was given the option of sending a written apology to God and waiting to see if he accepted my apology. I dictated the letter to my father (not yet having mastered the alphabet) and we left it on the roof as high as we could.
That night, while waiting to find out my fate, I received my first visitation. I was in bed thinking about the day and casually leafing through a story book when I heard a strange sound. It was a strange rhythmic squeak coming from the ceiling above my bed. At first I couldn't see anything but the noise grew louder. Eventually what looked like a cork screw appeared and it continued to make the hole bigger. A face peared at me from the hole as a rope with a swing on the end of it was lowered towards me. At this point my mother barged in with the ironing and proceeded to put my clothes away. She was completely oblivious to what was going on. The swing contraption was pulled back up until my mum left the room. All this went on without a word from any of us. I just lay there wide eyed with curiosity and without a hint of fear! The swing thing was again lowered until it was almost touching my face. Suddenly, I knew that I was required to climb onto the swing, that it was a vehicle for me to ascend to the heavens and explain my crime to god himself. But I wasn't stupid! I shot out of my bed and out of my room at lightning speed and joined the rest of my family in the sitting room. my heart was thumping and I kept looking around to see if I'd been followed. I didn't go to bed till my sister was tired enough to join me. I never spoke of this to anyone but the next morning my letter had gone. My dad said that meant I'd been forgiven.
Over the years, I have caught glimpses of the same angel, but he'd disappear as soon as I caught sight of him. I saw him the night after my daughter Lucy was born. And again after my mother's funeral. There have been many other occasions but those two stick in my mind because they lasted a while. I'm not crazy, but I can't explain what happened rationally. Since then I have been somewhat wary of angels, I don't think they are always as angelic as they want us to believe.
Posted by bunnymazhari at 3:45:00 pm