Taboos in Art: The Erect Penis.

This post is a little light relief from the relentless negativity of criticising artists whose work I don't love. I will resume that post later on but for now, something a little different.
What is the rudest image you can think of? What kind of image would drive you to avert your eyes and back out of the room? Stumped yet? Well according to censorship boards in even the most liberal societies it is the erect penis! Fainted yet? apparently the sight of an erect penis is so potent it can corrupt your maiden aunt and send a community directly to hell.
I have always had a thing about penises (or is that peni?) I just checked that out and it seems both are correct the first being the English form, the second is Latin. I like the shape, the texture and the fact that they have a life of their own. The vagina is more secretive, it doesn't give much away, very much like a woman in fact. The vagina is hard to read, mysterious and complicated. None of that makes it any less valuable or attractive. Don't get me wrong, I am a woman, a ferocious feminist and a standard bearer for vagina power, but this post will focus on the male tackle, I shall deal with the vagina in a later post. I still maintain a penis is more endearing, a little ridiculous and a comic solution to a natural design puzzle. The combination of penis and scrotum (just the words induce juvenile giggles!) are a funny little package, they have their own separate existence from the man they come attached to. And I defy any man to assert any control over his errant 'manhood'.
The penis comes in an infinite variety of shapes and sizes, no two are the same. That in itself makes it a fascinating subject for the artist. A phallus can actually look depressed, sleepy or perky and ready to greet the world, if only it could speak. I have been accused of being obsessed with willies, and they do feature fairly often in my work. I refute the obsession part but freely admit making full use of the image when I think it is called for. Since time began, men have tried to brainwash us into seeing the male genitalia as a symbol of might and superiority, they have tried oh so hard to instil in us a hushed reverence for the power of the penis. But at the back of their minds they must have been aware of the comedy aspect of the 'todger', 'dick' and 'sausage'. Were they overcompensating? Did they really believe that they could condition us to forget how silly it looked by enforcing blanket respect? 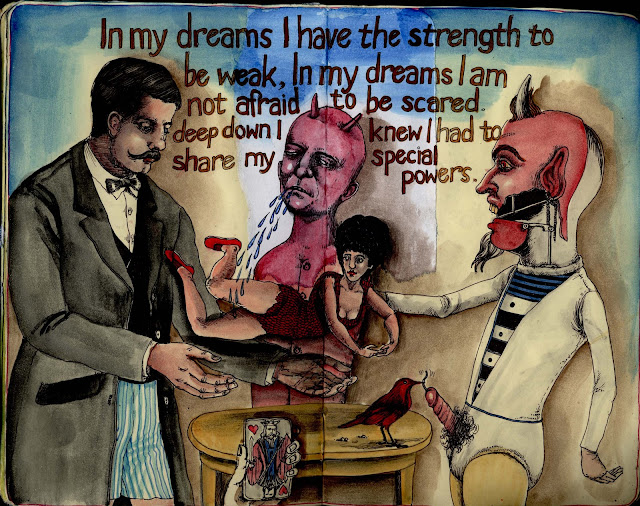 God really did play a dirty trick on men! He gave them physical strength, ruthless focus and dominion over everything but made them pay for it by choosing the least sober and serious option his design comitee could come up with. So hurray for the penis, that comical little body part that has over the centuries turned the world upside down and back again.Where would we be without it! 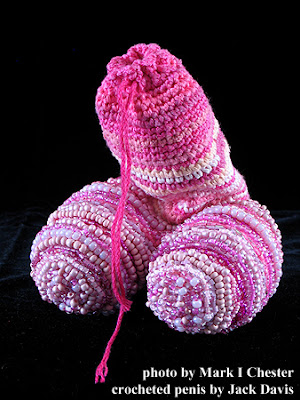