Now and again, I get an overwhelming urge to make something. I do consider 2d art 'something' obviously, but the urge is to produce something tactile, 3D and separate from my daily work. I don't own a sewing machine ( I am eyeing up a nice Bernina machine with ungodly lust) and I intend to buy one when finances allow. So all my sewing has to be by hand. Unlike my artwork and my Moleskines, I approach fabric work with a little more organization and preparation. I decide on the item I wish to make, collect odds and ends of fabric, then look around for a pattern to adapt. I was useless at sewing at school, couldn't see the point frankly! And I hated the fact that I had to make a prissy nightdress case when my brother was out playing with his friends. I associated sewing, embroidery and cooking with every stereotype of the happily downtrodden housewife I saw around me. (this is the Middle-East I'm talking about.) I never saw any artistic value in needlework, I just found it faintly distasteful, something you took up when you got periods and boobs... ugh!
Now, of course I know better, and really wish I'd paid more attention. My English grandmother was a brilliant dressmaker/needleworker. In fact one of my most memorable Christmas presents I received from her was a complete wardrobe of beautifully made clothes for my doll Claire. She made day wear, nightwear, underwear... clothes for every occasion. My Arabic grandmother was a more prosaic needleworker, she'd could use a sewing machine but preferred the services of a dressmaker like most Middle-Eastern women.
I've had to start from scratch. learning by trial and error, my only secret to durable, well-made items is to use tiny stitches very close together. One bonus of not having a grounding in sewing is that I am not put off by the impossible. I just keep trying unorthodox ways until I am satisfied.
The Changeling
The Changeling was based on fairy tales about Goblins who swap newborn human babies for one of their ... ahem... less attractive variety. I adapted a baby doll pattern. I used antique porcelain teeth given to me by a very generous friend, and his eyes were enamelled copper to give them a human limpid look. The best part of making him was creating his accessories; his bed, bedding and lumps of poop, these were lovingly fashioned out of balls of Fimo clumped together, then painted and varnished. 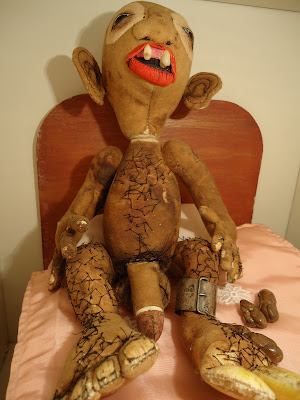 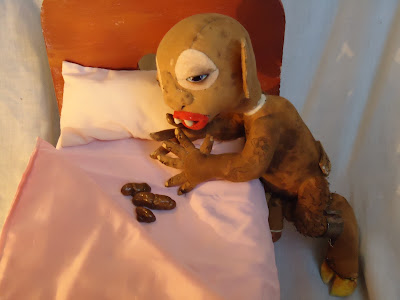 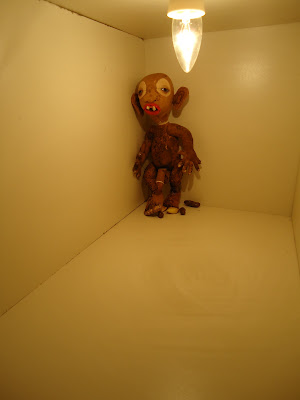 Underage sex
This one is a model of a schoolgirl who delivers all her babies while waiting for the school bus. I made-up the pattern for this one as I went along. it was quite difficult to create an expanding stomach that can house her babies but deflate when they were pulled out. In the end I used an expanding tubular bandage. My favourite part is the model of the road and pavement where she waits for the bus. If anyone is interested in details, let me know and I'll give you more exact instructions. 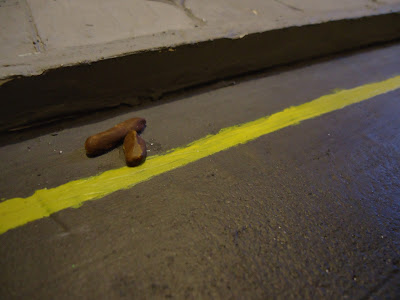 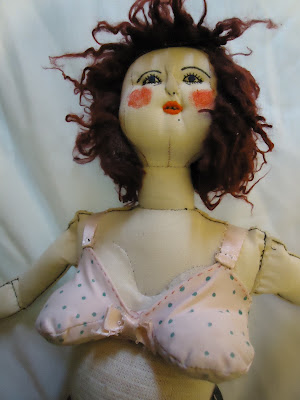 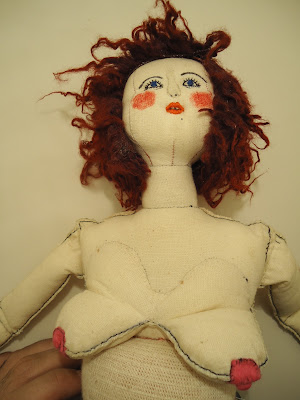 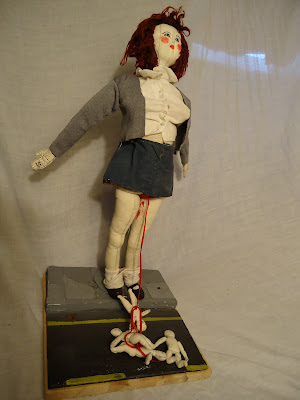 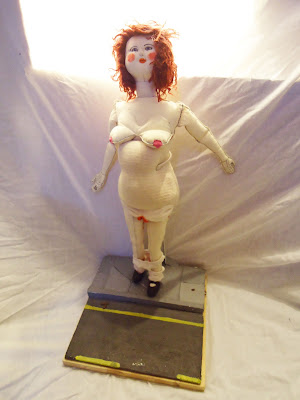 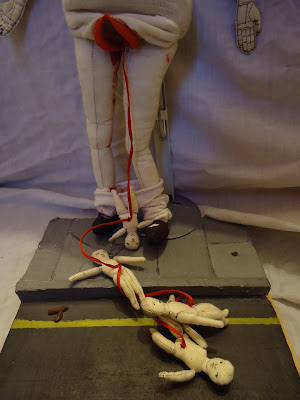 Al
Al is the name of my third doll. He stands for everyman who loves himself above all else and there are a few of those around. Again I made the pattern up as I went along. His face is a combination of paint and embroidery. He appears to be holding his baby wrapped by a blanket. Once the blanket is removed it becomes obvious that his baby is actually his penis ( I AM NOT OBSESSED WITH PENISES!)
I have a few more pieces that are in the planning stage, and a couple waiting to be photographed and added to this blog. If you are interested I will post them shortly. 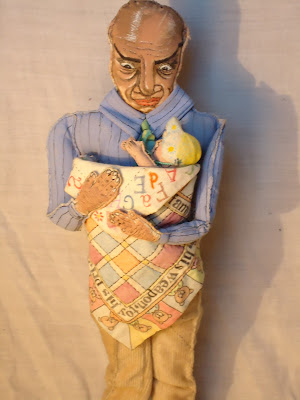 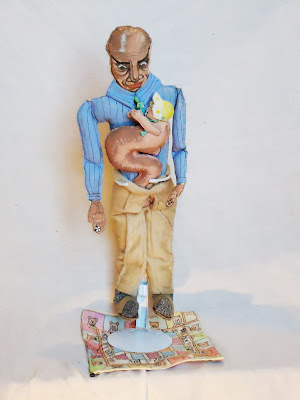 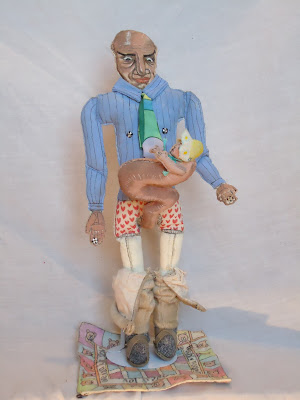